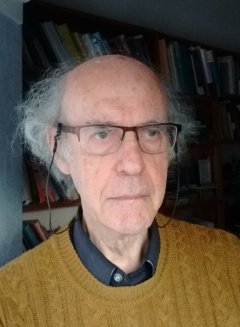 Not registered as user yet

Bio: After a degree in Maths and Physics in 1956, Aaron Sloman (BSc Cape Town, DPhil Oxford, Hon DSc Sussex, Fellow of AAAI, AISB, EURAI, ATI) kept chasing clues as to how biological brains made possible ancient mathematical discoveries (and many related kinds of spatial reasoning, e.g. in squirrels defeating “squirrel-proof” bird feeders and pre-verbal human toddlers investigating 3D topology). This has taken him through several branches of philosophy, AI, cognitive science, psychology, theoretical biology, robot design and wild speculation about how physics supports evolution of brains of thinkers like Archimedes, Euclid, Zeno and many intelligent animals, especially the role of sub-neural chemistry. During that pilgrimage he learnt to program, engaged with AI, helped to develop research and teaching tools (first at Sussex University, then University of Birmingham) and helped with development and marketing of Poplog, in addition to using it in his own research. He now suspects sub-neural chemical computations are central to answering his questions, but this talk will focus only on Poplog and some of its unusual features.